Andrey Gugnin thrilled and delighted our audience in March last year with performances of Rachmaninoff's Preludes op. 32, Mussorgsky's Pictures at an Exhibition and an all Beethoven Program, including an Appassionata Sonata like no other! Since visiting us last year he has triumphed in two major international competitions, winning the prestigious Gina Bachauer Competition in the USA and coming equal first in the Concorso Valsesia, in Italy.

The Liszt Transcendental Etudes are one of the most ambitious and virtuosically brilliant sets of 'studies' in the musical repertoire. No doubt inspired by Chopin's 'etudes', Liszt's studies are more elaborate and substantial. Each is a masterpiece. Together the twelve studies comprise one of the greatest technical challenges of the piano repertoire and an inspired musical journey.

Liszt Transcendental Etudes - selection
Andrey will select six or seven of the twelve etudes for the first half of the program.

Tchaikovsky Nocturne, op. 10 no.1 and Humoresque, op. 10 no.2
Two tuneful, short pieces, offering a respite from the fireworks of the Liszt and the piece to follow.

Arno Babajanian Six Pictures (1965)
Armenian Composer, Arno Babajanian (1921 - 1983) is described as 'an extraordinary musical talent' who came to the attention of Kachaturian when still a boy. His Six Pictures, 1965, is a collection of extraordinary rhythms and musical textures lasting around eleven minutes. According to Andrey, the piece is very popular in Russia. It will be a great opportunity to hear him play this work in Thailand.

Jacques Ibert  (1890 - 1962) - Petite Suite in Fifteen Images (1944)
Ibert was a French composer with an extensive repertoire of Orchestral, operatic, chamber and solo music. His music is lyrical, 'tinged with gentle humour' and a touch of classicism. Andrey assures me that the Petite Suite is 'wonderful music' but 'there are no good recordings of it.' So let him persuade us!

Tchaikovsky-Feinberg Scherzo from Symphony no. 6.
This is a dazzling transcription of the third movement of the sixth symphony, the Pathétique.

Brahms piano solo: Variations and Fugue on a Theme by Handel, op. 24 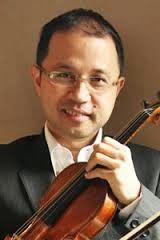 The Handel Variations is one of Brahms's two famous works for the piano in variation form. (The other is the Paganini Variations.) Brahms combines the romantic and the baroque in this original work, which was one of Andrey's winning performances at the Gina Bachauer Competition, last year.

The Brahms Piano Quintet in F minor is one of the greatest works in the chamber music repertoire. It is a grand and powerful work. The first movement, according to one musicologist, is 'an epic all of its own'.


Tasana Nagavajara is the Deputy Dean of Silpakorn University, former concertmaster and first violin of the Bangkok Symphony Orchestra and reincarnator of the Pro Musica Orchestra. We heard Tasana perform with our French cello and piano team last May in a stunning performance of Beethoven's Ghost Trio. I heard Tasana in a performance of the Brahms Quintet more than fifteen years ago in Bangkok and it was truly memorable. We are very fortunate to have him collaborating with Andrey and members of the Pro Musica Orchestra in a performance of this work.

Email asiachart@hotmail.com or call 038 069681 during office hours. Due to limited number of places payment must be received before the day.


Directions to Eelswamp: can be found at the bottom of this page: http://eelswamp.blogspot.com/2013/11/the-music-room-at-eelswamp.html
or simply search for Eelswamp on Google maps.


*Andrey came equal first in the Concorso Valsesia with another very talented Russian pianist, Evgeny Starodubtsev, who, by coincidence, will be visiting us next, in April.

Posted by gregory barton at 3:37 AM