Darbari: The King of Ragas 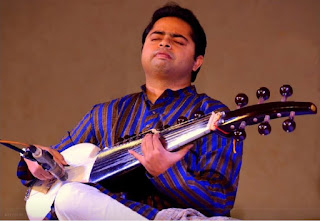 Abir Hussain, sarod
"...a force to reckon with..." Times of India 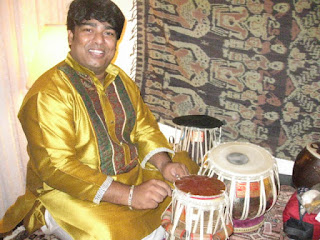 Next to the sitar, the sarod is the most important stringed music in north Indian classical music. It has been described as a four stringed 'lute'. But it could equally be compared to the banjo, having a goat skin covered bowl which resonates like a banjo. However, unlike the banjo or the lute, the sarod does not have frets. In that respect, the instrument resembles a slide guitar.

The sarod has four main strings and between nine and eleven sympathetic strings. The combination of the skin covered bowl and the sympathetic strings give the instrument its rich tone, described in wikipedia as a "deep, weighty, introspective sound", in contrast to the "sweet, overtone-rich texture of the sitar".

Abir Hussain is one of the most celebrated sarod players of the younger generation. He recently performed at the 63rd Dover Lane Music Conference, which is the most prestigious musical event in India. He was subsequently described by the Times of India as, "...fast becoming a force to reckon with in the Hindustani classical concert circle". Read the full interview here.

I have asked Abir and Sandip to perform Raag Darbari. According to sarodist, Rahul Bhattacharya, in his article, 'Raga Darbari: The King of Ragas, the Raga of Kings' ,

"Words cannot adequately describe the majesty of this Raga. In many ways, Darbari encapsulates all there is to say about Hindustani Classical music: the repose, the space, the meditative nature, the plaintive aspect, the introspection… the list goes on."

Join me on Friday, 20th November for this rare opportunity to hear Darbari on sarod.

Starting time: As Raag Darbari is a raga of the late evening, we will start a little later than usual. Performance will start at 7pm and finish around 9pm, possibly later.