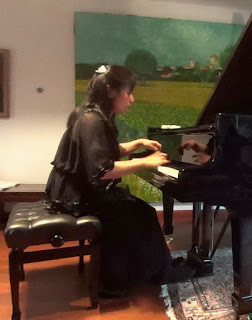 Exotic Journey
A program of music inspired by wanderlust

Godowsky: Gamelan and Chattering Monkeys at the Sacred Lake of Wendit from the Java Suite

Kanae Furomoto is a graduate of the Royal Academy of Music in London, where she studied with Lois Phillips and Hamish Milne. Her debut recital in Tokyo in 1995 was highly acclaimed and was subsequently broadcast on the radio station NHK-FM. In 1999 she played at the Purcell Room in London as a chosen soloist for the Park Lane Group Young Artist Concert Series. She has been regularly performing not only in the U.K. and Japan but also in Norway, the U.S.A, Switzerland, Italy, Germany, Poland, Hungary, Belgium, Austria, and China. She is a frequent visitor to Thailand and is brought to us by Mongkol of D and M Studio.

Kanae visited Eelswamp in 2016 with a program of works inspired by Shakespeare which she performed with great panache. Her visit this April is both thematically interesting and well constructed, with a blend of exotic and well-known works. I look forward to welcoming her back.

Posted by gregory barton at 9:55 PM