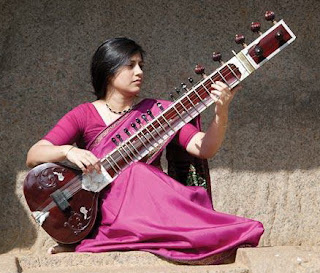 Winner of All India Radio Competition 1994

"Disciple of a sitar legend, destined to be a legend in her time"
"Tremendous control of the sitar ... a sheer delight to listen to."
Attenborough Arts Centre

Anupama Bhagwat is one of the top sitar players in India and one of the most brilliant sitar players of her generation. She is a disciple of sitar legend, Bimalendu Mukherjee, father and guru of one of the greatest living sitar players, Budhaditya Mukherjee (who, in his youth, was likened to Jimmy Hendrix for his extraordinary virtuosity). She has performed in the US, both east and west coasts, Switzerland, Paris and at the most prestigious Indian music festival in London at the Southbank, The Darbar Festival. She is regularly invited to perform at the Dover Lane Music Conference, one of the most important music festivals in India. Anupama visited us in 2016 and thrilled the audience with a magnificent performance of Raag Malkauns. This is a talent not to be missed. 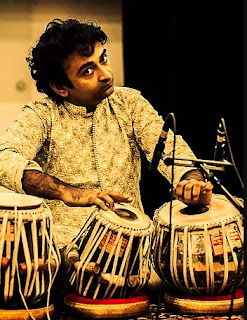 Rahul Pophali, tabla: Rahul is a well-established tabla player. He has performed more than 1000 concerts of Indian Classical and World music over the last 20 years, in India and around the world, including performances in USA, Australia, Poland, Norway and Canada.

Reservations: 1,000 baht per person. Email asiachart@hotmail.com or call 038 069681 office hours. Due to limited number of places payment must be received before the day.

Posted by gregory barton at 9:33 PM