Sergey Sobolev
prizewinner of the Tchaikovsky and Queen Elizabeth Competitions, among others

returns to Eelswamp with two programs

Encore program Monday 12th at 6pm
with the Beethoven Symphony and works from 11th... see below for details 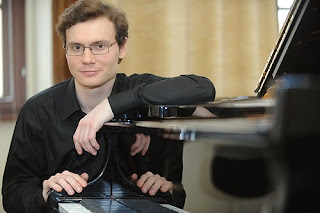 including a program of four hands
with Evgeniya Solunskaya (Mrs Sobolev) 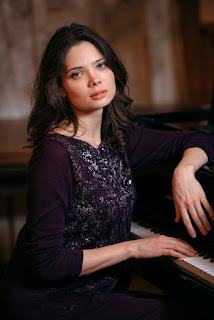 with Beethoven's Symphony No. 3, 'Eroica'

and works by Mozart, Taneyev, Shostakovich, Medtner, Brahms and Bizet

First half: Preludes and fugues post-Bach 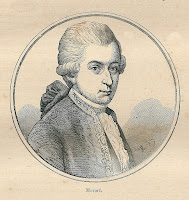 Mozart: Fantasia and fugue in C major K 394 written in Vienna around the time of the opera Abduction from the Seraglio in 1782, this a lesser known, but very fine work with a homage to Bach, who died only 32 years prior to the date of composition.

Sergei Taneyev: Prelude and fugue in G-sharp minor, op.29 a brilliant work of virtuosity and great musicianship by one of Tchaikovsky's contemporaries. Taneyev was the soloist in the premier of Tchaikovsky's first piano concerto. You might also recall that he wrote the fugue variation for Tchaikovsky's Trio in A minor, which we heard performed last year.

Shostakovich: 3 Preludes and fugues op.87: A sampler of something great to come in November; three diverse examples from the 24 p's and f's.
no. 4 in E minor a meditative prelude followed by a double fugue which develops into a mighty climax
no. 7 A major, one of the most beautiful fugues ever written
no.15 D-flat major ... and one of the wildest! 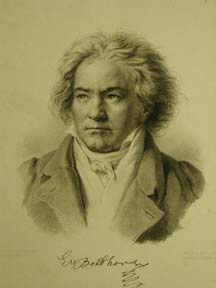 Second half: Beethoven - Liszt. Symphony no 3 in E flat major op.55, 'Eroica' Franz Liszt's piano transcription of Beethoven's monumental Eroica symphony captures all of the drama and excitement of the original score.

First half: works of Nikolai Medtner
a continuation of this year's Medtner theme

Sonata - Elegy in D minor op.11 no 2 a short, early work
Three pieces from The Forgotten Melodies op. 38:  These are three short dances from the same opus number as the Sonata Reminiscenza, which we heard Eva Yulin Shen play in early July.
no. 5 Danza Rustica a waltz in contrary motion
no. 6 Canzona Serenata a short, but sumptuous, variation on the Reminiscenza sonata
no. 7 Danza Silvestra spectacular, helter skelter, introduction to a robust dance theme

Sonata No. 8, 'Ballade', in F sharp major op. 27 Another of the most popular Medtner sonatas. (We heard Andrey Gugnin play no. 12, 'Romantica' in February and Eva Shen do no 10, Reminiscenza, in July.)

Second half: The Four Hands Program,


Sergey will be joined by Evgeniya Solunskaya 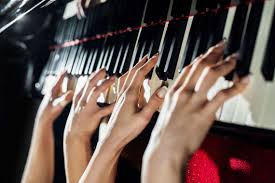 Encore Program: Monday 12th September at 6pm: This program will include the complete Beethoven Symphony and works from the program on the 11th: probably a few pieces for four hands. Price: 500 baht if you have attended either of the programs on 9th or 11th and 1,200 if you have not. Children free. All proceeds will go directly to the musicians.

Sergey Sobolev has visited Eelswamp on two previous occasions and needs no introduction to those who have attended his recitals.  According to at least two members of the audience his Scriabin was the best they had ever heard.

Sergey is a graduate of Moscow Conservatory and the Royal College of Music, London. He is prizewinner in two of the world's most prestigious piano competitions: the Tchaikovsky Competition, Moscow and The Queen Elizabeth Competition, Belgium as well as The Liszt Weimar Competition, Nikolai Rubinstein Competition, Scriabin International Competition Moscow and the Santander Competition.

Evgeniya Solunskaya (Mrs Sobolev) is a graduate of the Gnessin Academy of Music, an elite music school in Moscow, second only to the Conservatory. Its Alumni include Boris Berezovsky, Evgeny Kissin and Daniil Trifonov. Evgeniya completed a post graduate course in voice accompaniment. During her music studies Evgeniya was granted  a scholarship by the International Charitable Foundation of the renown conductor, Vladimir Spivakov.  Evgeniya currently works at the State Wind Music College, Moscow, as an accompanist. She is a prize winner of international competitions such as the International Forum "Musical Performance and Pedagogics" in Finland (Jyväskylä, 2010) and the XIII International festival "Musica Classica" in Russia. Evgeniya and Sergey married last year. Sergey notified me tersely, "...by the way, I married Evgeniya".


Reservations: 1,200 baht for one concert. 2,000 baht for two. Email asiachart@hotmail.com or call 038 069681 office hours. Due to limited number of places payment must be received before the day.

Posted by gregory barton at 2:15 AM