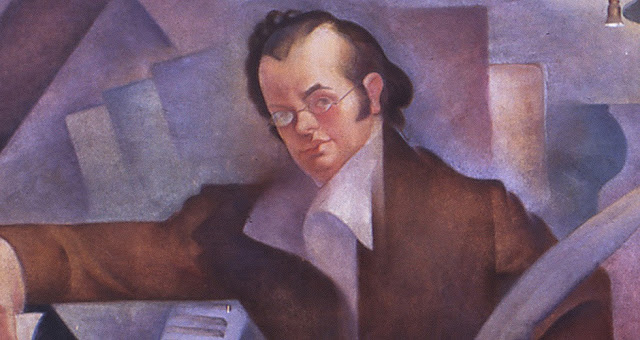 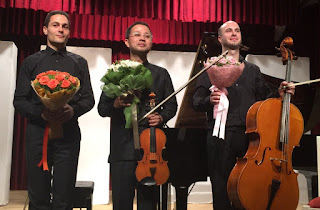 An early work in four movements, written in 1934 during a period of emotional turmoil during which Shostakovich divorced his wife to pursue an infatuation with a student. Tsk, tsk. Didn't last long before he and Nina were remarried - just in time for the birth of their daughter.


Schubert, Trio no. 1 in B flat, op.99
The first of Schubert's two, monumental, trios. It was composed in 1827 and first performed in 1828, Schubert's last year. Robert Schumann described the trio:

"One glance at it and the troubles of our human existence disappear and the whole world is fresh and bright again…The first movement is a thing of grace, intimate…The Adagio is a blissful dream state, a pulsating flow of exquisitely human emotion...." 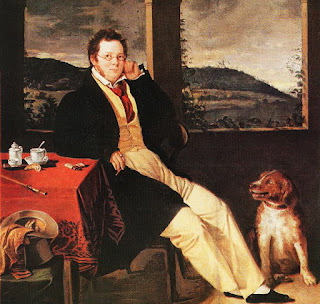 Prokofiev, Cello Sonata in C major, op.119
"A miraculous piece," said composer Myaskovsky on the premier of this work in 1950. It was written during a period of artistic repression when Prokofiev, along with Khachaturian, Shostakovich and other Soviet composers were censured for being too 'cosmopolitan and formalistic'. Prokofiev went underground, but after hearing Rostropovich in 1949 was determined to write a piece for him. The result is this rather jolly and melodious composition. Sviatoslav Richter, who premiered the work with Rostropovich described it as follows:

The "Cello Sonata in C Major" is a wonderfully inventive and effusive song of twilight. A soaring, lyrically sophisticated tribute to the power of creative inspiration of a genius!

"...gigantic in length and breadth, wealthy in thematic ideas, constant transformations and ingenious details of construction. ... Like much of Schubert’s “late” music, it is grand and profound in a way that goes well beyond the relatively modest context in which he wrote."

The iconic theme from the second movement, based on a Swedish folk song, has been used in numerous film and documentary scores, including Kubrick's 'Barry Lyndon'. 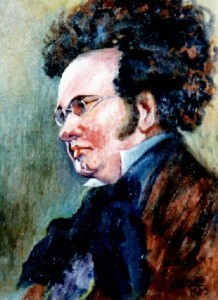 Tasana Nagavajara is the director of the Pro Musica Orchestra, Bangkok and former concertmaster of the Bangkok Symphony Orchestra. He is well known to our audience, having performed twice with the Alexandre and Dimitri as well as with Andrey Gugnin and Pornphan Banternghansa.

Alexandre Vay and Dimitri Papadopoulos are two French musicians who have been playing together since Conservatory days in Lyon. Alexandre is co-soloist in the Munich Radio Orchestra. Dimitri is 'Professeur' at Geneva Conservatory. Alexandre and Dimitri performed the complete Beethoven Cello Sonata and Variation cycle in 2014 at Eelswamp and joined Tasana last year for a performances of the mighty Tchaikovsky Trio in A minor and the Dvorak F minor trio. Their dedication to difficult repertoire, such as the two Schubert trios, which are rarely played together, marks them for distinction. 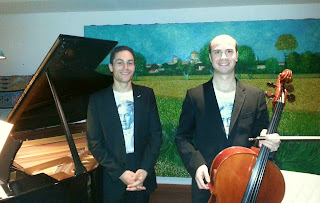 Posted by gregory barton at 7:35 AM