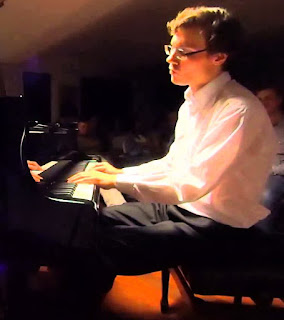 
Schubert: Sonata no 19 in C minor D 958 - one of Schubert's last three sonatas, written during the last few months of the composer's life, in 1828.

Schumann: Humoreske in B flat major op. 20 - a suite of seven contrasting movements, dedicated to (probably) another of Schumann's curly-locked heart-throbs; elegant romanticism at its apotheosis.

Chopin: Nocturne in C minor op. 48 no.1 - a titanic work with ferociously difficult double octaves; one of Chopin's most passionate works.


Liszt: Transcendental Etude no. 10 in F minor - dubbed, "Appassionata", this etude is, according to Wikipedia, "a study in pushing melodic lines to the razor's edge with passion and dramaticism while maintaining the melody."


Scriabin: Sonata no. 3 in F-sharp minor op. 23 - an early work in ultra-romantic style


Scriabin: Poeme "Vers la flamme" op. 72 - a short late work and a favourite of Horowitz who described it as, "completely special music".

Prokofiev: Sonata no 6 in A major op. 82 - written in 1940, the first of his 'War Sonata' trilogy comprising the 6th, 7th and 8th. The sixth is 'epic and dramatic' according to Robert Cummings. It is a well balanced work, with four movements culminating in a whirlwind finale. 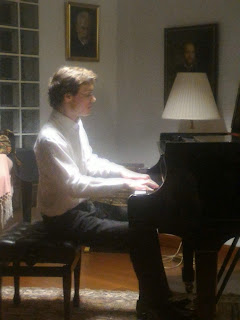 Sergey Sobolev is a Russian pianist. He graduated from Moscow Conservatory and the Royal College London. Sergey has visited Eelswamp on four previous occasions. He has a brilliant technical level, great musical taste and an encyclopedic knowledge of music.  According to at least two members of the audience Sergey's Scriabin was the best they had ever heard. Not surprising as Sergey is a student of one of the great Russian pianists and pedagogues, Mikhail Voskresensky, who won a prize at the first Van Cliburn Competition in 1962 and is head of the piano department at Moscow Conservatory.

Sergey puts a lot of thought into his programs, making them interesting and thematic and always considering the enjoyment of the audience. Please join me for these two wonderful programs.

Posted by gregory barton at 5:53 PM