"The pure musicality which Derzhavina displays in these recordings is enough to transport one almost magically to a transcendental state."

"Prepare to have your life enhanced. You could strain the vocabulary of delight simply trying to describe Haydn's piano sonatas being played by anyone, anywhere."

Bach's iconic set of thirty variations based on an aria has been described as 'a monument of Western music'. This is one of the composer's greatest hits, recorded at least 180 times (counting the list on Wiki) the most celebrated of which are the two sets by Glenn Gould. 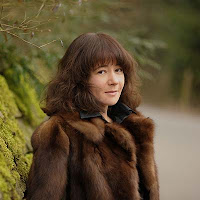 Ekaterina Derzhavina is a Moscow-born pianist. She studied at Gnessin Russian Music Academy. Her professors included Vladimir Tropp. In 1992 she won First Prize in the JS Bach Competition, Würzburg. She has performed around the world and has recorded numerous CDs, including an award-winning complete piano sonatas of Haydn and the Goldberg variations. Both of these recordings received rave reviews on Amazon. Links to the reviews, below.

Posted by gregory barton at 9:11 PM